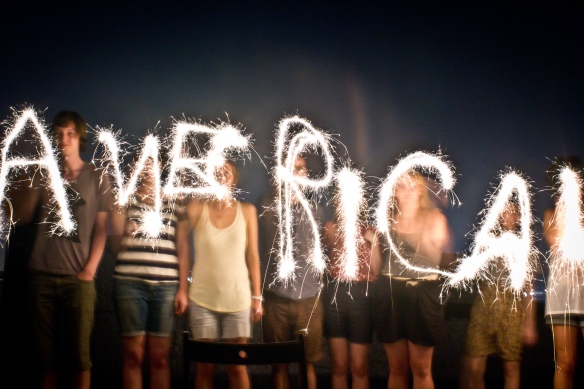 1. OBVIOUSLY- Colonial Williamsburg has it goin on. Here’s what’s scheduled:

10:00 AM: Salute to the States
11:00 AM: It wouldn’t be July 4 without a Reading of the Declaration of Independence on the Courthouse Steps
11:30 AM – 4:00 PM: The Colonial Faire– 18th-century inspired games (tomahawk throwing, dancing, trap ball, quoits, 3-legged races, hoops, running races, tug of war, and sack races) (you’ll need your Good Neighbor Pass or an admission ticket for this)
3:45 PM: Dialogues in Revolution, 1776– the Founding Fathers speak (again, you’ll need your Good Neighbor Pass)
5:00 PM: (This looks cool!) Swinging on a Star: A Tribute to the Local USOs and the Troops of World War II– $7 for adults 13+, $5 for kids- at the Hennage Auditorium in the Art Museum
8:15 PM: Concert by Colonial Williamsburg Fifes and Drums– free- get out of their way because they DO NOT STOP
8:45 PM: Illuminations of Market Square and Palace Green (free)
9:10 PM: A Salute to the Nation (free)- concluding with FIREWORKS! 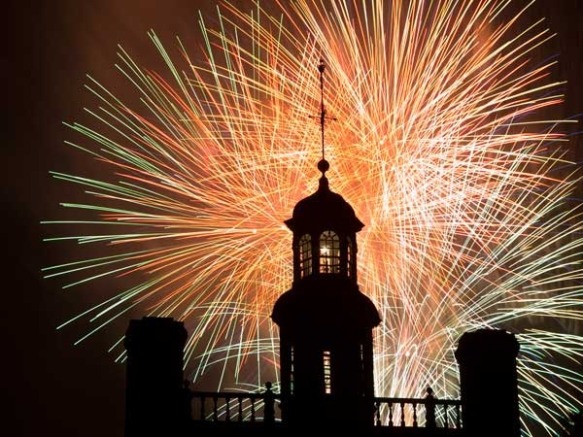 And here’s what you need to know if you plan to go:

– For the love of your sanity, do NOT try to park close to Merchant’s Square unless you get here early in the morning. Park at the CW Visitor Center and take the shuttle (warning, the shuttle does NOT run while the fireworks are happening), OR, park at New Town or High Street and ride the WATA Trolley. Here’s what WATA has to say:

WATA will have 3 trolleys available; one trolley running its regular route from noon to 11:00 p.m., one running express service directly from New Town to the historic area, and one running express service directly from High Street to the historic area. The express trolleys will begin at 7:00 p.m. and end around 11:00 p.m. The Trolley will be utilizing Ewell Circle on Jamestown Road as the drop off and pick up location this year to avoid some of the traffic hold ups that happen on Richmond Road.

– Just be prepared: bring flashlights, water, wear COMFORTABLE shoes, bring earplugs (they’re not just for kids), sunscreen, etc- just be smart. And be prepared to be in the middle of a HUGE crowd.

– Expect it to take forever to get back to your car after the fireworks. It’s just gonna happen. But it will have been worth it! 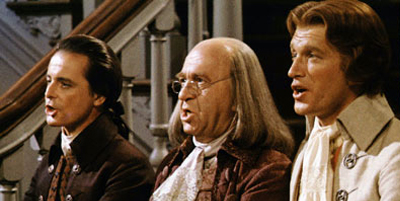 I mean, where else are you going to see the Founding Fathers singing in a musical?

Here’s what WhatsHappeningWilliamsburg movie critic Scott Graves has to say about it:

The 1972 film adaptation of the Broadway musical 1776 is an account of the struggle to secure a vote in favor of independence from the second Continental Congress. Political maneuvers of Benjamin Franklin and John Adams lead to Thomas Jefferson’s drafting of the Declaration of Independence. I won’t spoil the rest. Much of the central cast reprised their roles from the 1969 Broadway production, including Howard DeSilva (blacklisted in the early 1950s) as Franklin, Ken Howard as Jefferson, and William Daniels as Adams. Daniels is best known, depending on your generation, as Dustin Hoffman’s father in The Graduate, Dr. Mark Craig on St. Elsewhere (or the voice of Knight Rider supercar KITT), or Mr. Feeny from Boy Meets World. If you’ve always wanted to watch the voice of David Hasselhoff’s car talk high-stakes politics with the high school basketball coach from TV’s The White Shadow (played by Howard), this is the movie for you. The Kimball says 1776 is rated R, but IMDb holds that it is PG. Perhaps this is the extended cut showing the party after the vote. 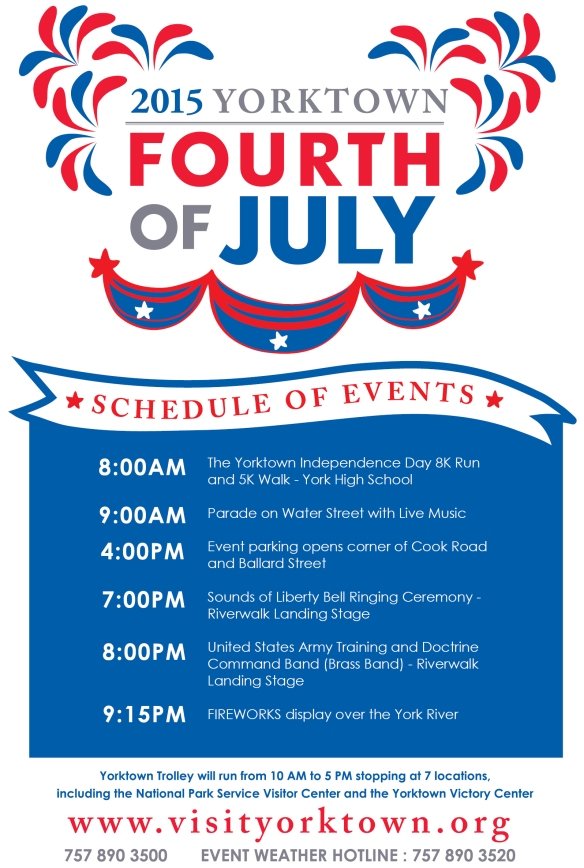 Everything you need to know in one handy photo! 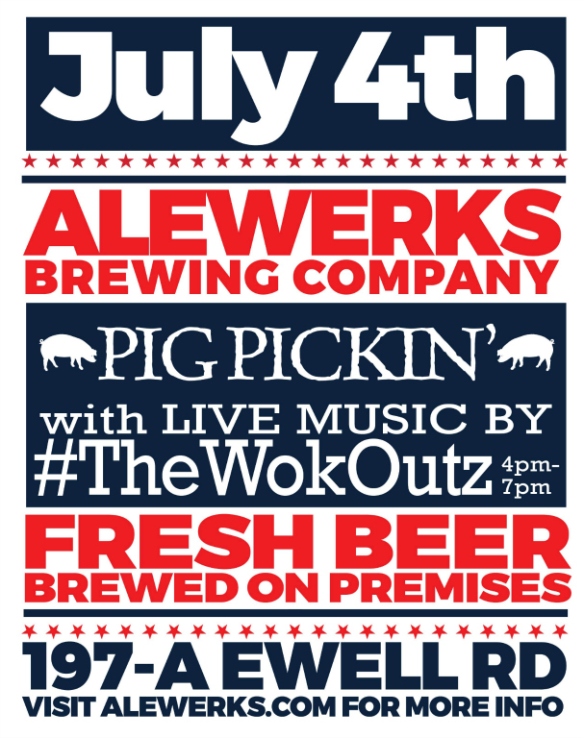 – Alewerks is going to have their much-acclaimed Cafe Royale available (it’s a vanilla and bourbon coffee stout . . yup)
– The MUSIC is 4-7 but the event actually starts at noon and goes to 9:30 pm!
– I asked how much the food is going to be, and they said expect plates to be $10 but it might be less. That’s a great deal!
– Good beer, good food, good music, and away from the madness downtown! What more could you ask for?

Y’all HAPPY FOURTH and BE SAFE!!!

No, not those Thunderbirds– I’m talking about the Native American kind. Step aside, Etsy and fake tribal patterns from Forever 21- let the original masters show you how it’s done.

Imagine living in a pueblo during the Great Depression. Your family has earned money for generations making and selling jewelry to both fellow native people and tourists alike. But now . . . there’s no money for the precious stones and metals. What do you do? 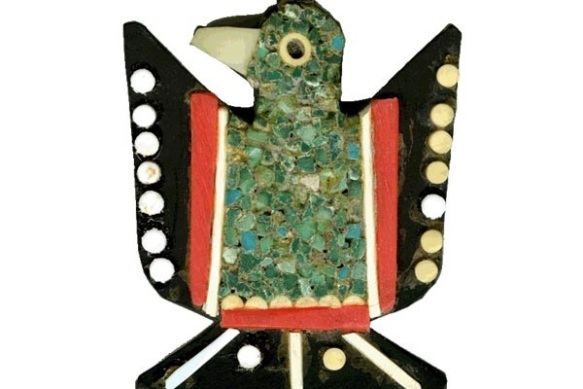 The jewelry makers of the Santo Domingo Pueblo in New Mexico responded to this shortage by doing what artists do naturally- taking inspiration from the world around them. Instead of precious stones, they used plastic from LP records, car batteries, and anything else that had the desired color and could be manipulated into jewelry.

This weekend, “Thunderbirds: Jewelry of the Santo Domingo Pueblo” is opening at the Folk Art Museum of Colonial Williamsburg. You’ll be able to see how the artists kept their traditions alive and provided for their families by creatively transforming the resources at hand.

Bonus! Saturday there’s a lecture by the curators themselves, Roddy and Sally Moore. If you want to learn the story behind this jewelry, it’s a must-see. You’ll need either your Good Neighbor Pass ($10 for the whole year) or a Museum Admission ticket ($13). 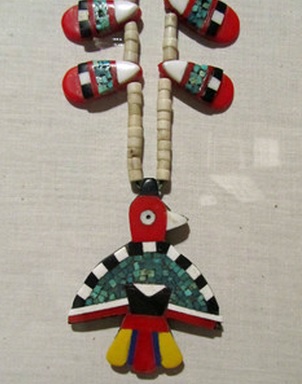